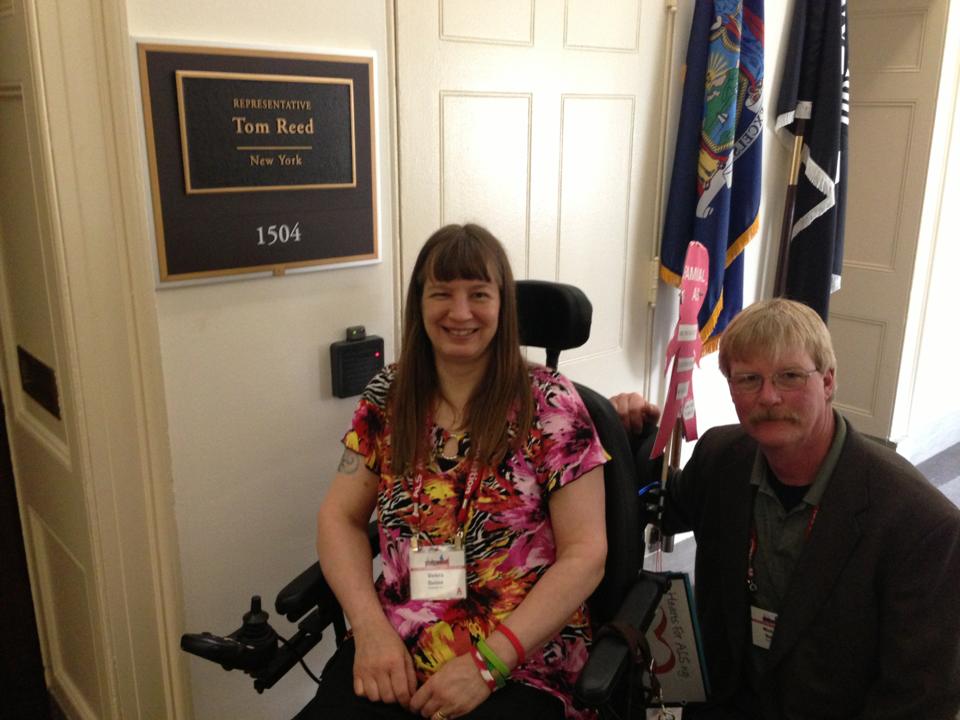 My message today is about change and never closing the door on hope for this disease.

I was only 13 years old when ALS became a part of my life. It was 1977 and I was staying with my grandparents. I overheard them talking about Grandma’s sister Ginny having the "creepy crawly disease." Back then, ALS was often called that or “consumption of the nerves.” Grandpa asked if this was the same disease Ginny’s great-grandmother died from years ago. Grandma said Ginny was losing her ability to swallow, and her skin was crawling as if bugs were underneath it. The “bugs” were what is now known as fasciculations, or muscle twitches, that are characteristic of ALS. I remember thinking, “Wow, Great-Aunt Ginny has bugs in her body and I hope I never get that!” But we were not supposed to listen to adult conversations, so I never asked about the bugs. Ginny passed way three months later and the door was closed on ALS. (Virginia Black Hosmer-age 47)

Little did we know the door would re-open in 1979. This time my Aunt Bonnie, Grandma’s daughter, was sick. She was a beautiful, 38-year-old, divorced, single mother. At the time her four children ranged in age from 11 to 17. We didn't know how to properly care for her, but my mom and grandma did the best they could. Bonnie’s primary caregiver became her 13-year-old son. My dad nailed a wooden chair to a car creeper with rollers on it, and this contraption was her “wheelchair.” The scars Bonnie’s children endured from caring for their dying mother at such a young age have never healed. Bonnie passed away within five months of diagnosis. The door was closing on ALS again, but not before I asked a few questions. Grandma said there was this "muscle disease" that seemed to be in her family and causes muscles to crawl, and that there was nothing the doctors could do. She showed me the two pages of information the doctor had given her, and that was all she knew about this thing called ALS. Back then, there wasn't any help like ALSA or a chapter to turn to for ALS patients and their families. ALSA wasn't formed until 1985. Change was coming.

In December 1989, my dad, Grandma’s son, took a terrible fall down the icy front steps of his house. He believed this to be the onset of his ALS symptoms. He lost the ability to hunt and fish, which for him was a way of life. And in 1991, I lost my dad to ALS. He lived just 11 months from diagnosis. My mom developed creative methods to make it easier to care for my dad, as this was her third time facing ALS as a caregiver. But we still didn’t know how to get help for ALS families. (William “Bill” McQueen-age 51)

Then in 1996, Grandma died of bulbar ALS, where she lost her speaking and swallowing abilities before limb function, and also suffered from dementia sometimes associated with the disease. In her last few months, she came to my home and I cared for her with the help of my husband and mom. I learned so much from Grandma throughout my life and she was a very special lady. She always felt this disease was her fault. Upon researching our genealogy, I traced the disease through 13 generations of Grandma’s family to the early 1600s, discovering more than 20 additional family members who suffered from what we now call ALS. Once again with Grandma’s illness, we held questions but no answers. And living in a very rural area, the doctors never offered ALSA for help. We cared for Grandma on our own, for my mom the fourth time, and then closed the door again. Never in our wildest dreams did we think ALS would keep reappearing in our lives. I remember thinking that not much had changed from 1977 to 1996, and wondering how much one family should suffer.

The hardest part is always to tell the story of my little sister Rhonda. She was 38 and married with children ages 8 and 11 when ALS took her life. Mom was a pro by now and she became Rhonda's 24/7 caregiver for seven months. Rhonda had a vibrant personality and was always the life of the party. After two misdiagnoses, Rhonda thought she'd be alright; after all she had gone to a certified ALS clinic. She thought they had to be right that her symptoms weren’t ALS. But upon a third opinion, she was told it was ALS and given about six months to live. She lost her fight five short months later in January 2007. She suffered deeply and without the proper help or equipment. During her last four months, she was never able to leave her house as they didn't have a wheelchair van or a way to get over the steps outside. Rhonda did not leave us without making a change. She wanted DNA testing done to see if our family carried the SOD1 gene. This gave us the marker (SOD1 A4V) for researchers to test other family members and to open the door for hope.

I began this fight in Oct. 2009. It took me three months to tell my mom she would lose another child to ALS. I have two wonderful co-workers who helped me fling the door wide open and search for more information. Little did we know three women would embark upon a journey that would find friendship, love and lots of encouragement within an ALS support group. We travel 90 minutes one way each month to attend the ALSA chapter meetings in Rochester, N.Y. Living in the southern tier of the state, we don't have this resource in rural areas. We became involved and wanted to make a change. I've brought awareness into our community, raising $$ through our Quinner’s Quickfeet ALS team. I will not settle to keep the door closed and be quiet about this disease. It is hard, but I am the voice for my children, nieces, nephews and cousins, all whom have a 50 percent chance of inheriting ALS. For them, for everyone, we need to seek change as each door we walk through may lead us to a cure.

We are also related to the Farr, Gilson, Hadley and Underwood Families

The door is open wider than it ever has been to talk about this beast called ALS. We have clinical trials, health care providers, respite care, and the National ALS Advocacy Day and Public Policy Conference in Washington, D.C. I encourage you to join us upon the wings of a swallow, may we fly into the changes that are needed to stop ALS.

Thank you for reading my ALS story.

Hearts for ALS NY was created to increase awareness and understanding of ALS through volunteer programs and act as a resource for patients and caregivers to improve the quality of life. EVERY dollar raised will remain here in the Southern Tier of NY to help patients LIVE with ALS, including myself. Hearts for ALS NY is a non-profit 501 c (3) foundation. Donations can be made to “Hearts for ALS”NY, PO Box 272, Avon, NY 14414